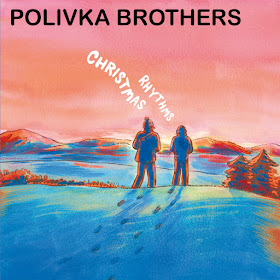 Hey, I know it’s the absolute tail end of August, and that’s fine, but I wanted to wish you a Merry Christmas, right here, right now. In fact, I’m so inspired by the holiday mainly because of the Polivka Brothers, Rob and Jef from Denver, who dropped a tape around Christmas 2018 that collected a batch of original Christmas tunes they made for friends and family in 2015. The nine songs, acoustic guitar and voice, are straightfaced odes of reverence to objects and traditions surrounding the holiday: holiday songs on the radio, going to the movies on Christmas Day, Snoopy, Santa, zithers (sure), being depressed on New Year’s (who isn’t?), and candy corn… naturally. These modern references and practices will strike a definite nostalgic chord with a lot of you, especially if you grew up in the 1980s and 1990s. I think I’ll have to introduce my brother to this one – he listens to Christmas music pretty much year round. Guess we have that in common now! 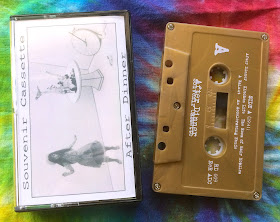 Only taking a half-decade off between 1981 and right now, Haco has been a pioneering force of outsider "pop", psychedelic rock, ambient*, and electro-acoustic experimentalism, not just in Japan, but worldwide. To peruse her Sound Art theses (click link below) is to wade in wildly oscillating awe through her intimate relationship with the invisible ubiquity of each and every sound and radio wave that engulfs us on the daily. Any avant-garde composer and experimentalist dabbler should know her greatness; both where she is now…and where she started.

Enter Fish Prints Inc, Massachusetts' dedicated, forward-thinking tape label that spends its only time not publishing tomorrow’s sonic adventurers on exploring the enchanted catacombs of criminally underrated visionaries past, digging up (and re-pressing long out of print releases by) bygone composers (often decades ago) who have as much to offer today as anyone working in the current field. After Dinner’s psychedelic whirlwind of a live performance at a French music festival in '87 fits this bill to a T.

On “Souvenir Cassette”, Haco’s commanding vocals range from a rich & sentimental contralto to a bludgeoning mid-upper belting out that could easily carry just about any backing music into greatness…but the five hired guns performing her spellbindingly WEIRD compositions behind her are all absolutely dialed in, lock step, shredding, jauntily chopping, and/or meditatively drawing out, without misstep, each and every single complex set of notes and motions. It’s unbelievably surreal that this performance hasn’t gone down in history.

Maybe it was the tape manipulations of birdsong, crickets, & dogs barking that threw off the psychedelic/hard rock crowd? Or the fusion of mesmerizing tango/military-waltzes and heavy blues riffs that confused the traditional/pop seekers? Perhaps the aleatory noisiness and breakneck transitions peppered throughout confused everyone? Make no mistake, this performance was magical, and is every bit as relevant today for any live performer to take note: you actually CAN throw in the kitchen sink and keep everything cohesive, but you gotta work HARD to do it. Like Haco. Be like Haco.

***UPDATE***
This pre-order for this release HAS ALREADY SOLD OUT, but a few more copies shall drop on August 30th via Fish Prints Inc. If you’ve lost faith in structured music/songs, this will bring you back around, and if you love it, this’ll deepen that love**. I’m officially a convert, and swooning.

*you may/should know her brilliant solo work on Room40, for example
**or ruin your favorite bands, by comparison, I suppose. Double-edged sword, here… 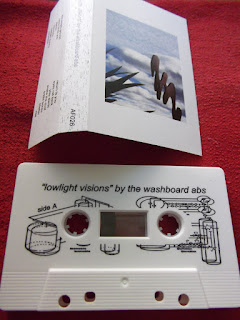 Finally, a band that truly speaks to me! The Washboard Abs, clearly inspired by my indelible six-pack, make music for the athletically inclined. Actually, that’s probably not true at all. As I listen, they seem more geared for the bookworm set, the library crawlers intent on teasing out every piece of knowledge and wisdom they can from the tomes around them. Actually, if I’m honest, I’m kind of a bookworm myself anyway, not some gym-haunting meathead who’s more interested in protein shakes than his emotional state. I mean, look at me – writing constantly about music. You think Lou Ferrigno ever did that?

Anyway, let’s forget about all the crunches I do and focus instead on “Lowlight Visions,” a dreamy indie rock excursion down paths blazed by Archer Prewitt and Sam Prekop and Prewitt-and-Prekop bands (like, uh, the Sea and Cake) and decidedly non-Prewitt-and-Prekop bands like Real Estate and even non-electronic and pretty Radiohead. It wouldn’t surprise me if it came out that the Washboard Abs played instruments made out of clouds instead of conventional instrument material, such is the weightlessness of their sound (which is reinforced by images of clouds on the cover). So if you’re in the market for super-wistful and feather-lite songs about love and fear (sadly, this record was conceived in the midst of frontperson Clarke Sondermann’s experience of becoming the primary caregiver to his partner following a cancer diagnosis), then the Washboard Abs are for you. And you won’t even have to bench press anything to get into it! You’ll actually find yourself uplifted in spirit more than anything. 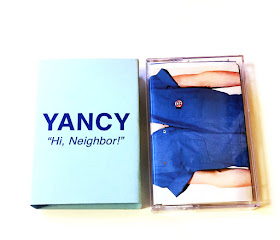 New Yorkers Yancy chuck beer bottles at you, because you've slighted them. 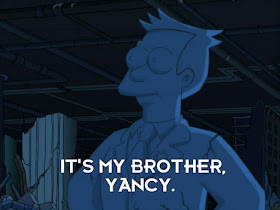 Overachievers or underachievers? You be the judge.

Regardless, Yancy delivers on squiggly post-punk as it battles it out in a noise-rock arena with other loud guitar rockers. Distorted chunks of raw tunage speed past in very little time, as if Yancy needed to scream and shout a lot of really important stuff but very quickly and in a supremely agitated manner. This EP is a lit fuse of an opening statement, its friendly titular overtures a mask of belligerence. Try this one on for size if you know what's good for ya. 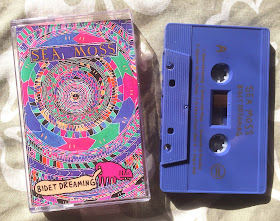 Go on. You deserve it. Re-read and re-chuckle at that album title. Try not to be jealous of how perfect a portmanteau it is, how many levels it applies to, concerning art-rock. Try not to feel bad. This duo builds it’s own electronics, for fuck’s sake; they’re smarter than you, more ambitious than you, and, doggone it, though possibly not angrier than you, they’ve sure as shit got more energy to blow off any pent up steamage than you!

Someone at some dance party or other probably publicly surveyed, “Hey y’all… Melt Banana’s “Cell Scrape” or Guerilla Toss’s “Eraser Stargazer"?” & PDX’s Noa Ver and Zach D'Agostino probably bit their tongues and swallowed their vitriol and they went home and they built an Arduino or four and took over the goddamn synth/punk/noise world with their wayward, robotic empire...

But hey, I’m just bullshitting here. I honestly have no clue about to what extent and how these folx engineered their own synths/drum machines/vocoders/amps/microphones/______s. Is there a flailing robot playing an actual drumkit (not impossible!), or is the drumkit just host to multiple trigger pads (more likely)? All I know is, through some undisclosed homemade devices, this DIYorDIE duo has pre-programmed a herd-able electronic bedlam that’s both danceable and outright circle-pit/moshable to. Their live performances have to be INSANE, and I wouldn’t miss one for the world. Listen to with the nob turned up to ELEVENS! 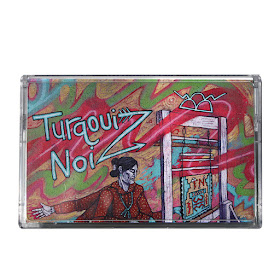 The weirdo Phoenix label Related Records confused the hell out of me with “Hi My Name Is Ryan” because my name is Ryan and I thought they were trolling me. I’m still not convinced they weren’t, but the cheekily spelt Turqouiz Noiz goes a little further as a way of apology, making me think that the label was at least lurking in bedroom around 1994 when I was listening to Dead Milkmen offshoot bands or Violent Femmes or Sebadoh. Those were primo formative years.

Turqouiz Noiz is four kooks called Brendan, Patrick, Rachel, and Rocky, and they speak the lo-fi rock jargon I was once so familiar with. Fun noisy experiments collide with fun fuzzy guitar jams for the freaked-out spazz we all once were. Would I have been surprised hearing Turqouiz Noiz busting out of my tiny clock radio speaker I hovered over to catch the latest Heavy Vegetable or Silkworm tune on the barely-in-range college radio station back in my high school years? No. no I would not. 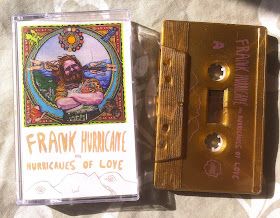 I honestly cannot list any more than ten words Nick Drake had ever sung. My attention was always on the guitar; just how in the hell were which of his fingers plucking which and how many strings in what succession?!

His breath might occasionally embellish a hammer-on; a consonant hiss or glottal tip-tap might have lent a sliding twang some added weight, but I sure as shit wasn’t hearing any sort of story or sentiment. The black feeling of his soft, inner howl could be counted on to depress my spirit sufficiently, while his convo-lute-d wizardry would reliably bewilder and entertain me, forever.

Neither Frank Hurricane, nor his Hurricanes of Love, for that matter, are Nick Drake. Though “Life is Spiritual” boasts a fair equivalent to ND (and Mississippi John Hurt, more specifically)’s six-string mastery, his (FH’s) Voice (both physical and literary) is the EXACT OPPOSITE, in terms of relaxation and mental mutability. Which is to say, you will listen and you will listen hard to what Mr. Hurricane has to say!

You will learn of myriad shady Appalachian characters (and otherworldly denizens, as well!) who engage in various illicit acts. You will be exposed to an egregious glorification of unregulated Schedule One and Schedule Two substances, and their copious consumptions. You will witness the word “spiritual" transform itself into the trisyllabic “spear-a-chill” & you will become aggressively woo-woo’d. Your lexicon will expand and redefine itself markedly through some slang and appropriation that I’m fairly certain but unable to prove right now is just made the fuck up for this specific album, but, it like, just sounds really cool and fun and definitely has both Merriam and Webster doing dusty pirouettes in their graves.

You will definitely find yourself in the company of others, hours later, with an insatiable desire to release the impassioned earworm “OOOOHH-OOOOOH, JUH-GAH-LOOOOO-OOOO-OO” with a snarky soulfulness you’ve always knew you had and had better suppress but now it hurts more to do so.

All sung & dunn, you will feel like you’ve just hung out with the crazy sumbitch that is Frank Hurricane, and you’ll wonder just how in the hell he’s lived so long without getting stabbed over rights to a Smokey Mountain still. Enjoy from the safety of your own stereo/altar. 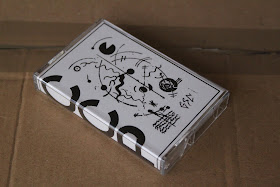 Concrete Colored Paint is not an easy listen, and that shouldn’t be a surprise to you. CCP is Peter Kris (German Army), who is legendary for unsettling listening experiences. Linhas em terra, recorded in Açores, Portugal, sounds like ghosts, voices from far away speaking into the haze of the afterlife. So what does Linhas em terra mean? “Ground lines.” We’re all connected.

We hear snippets of conversations, loops of live song, announcements, all underscored by the CCP drone-factory extravaganza. CCP is the perfect outlet for ratcheting up the tension underlying all elements of Portuguese life presented here. The tension arises when one realizes that the connection to all other people is tenuous, and we as humans are hellbent on severing it. This is just another document from the GeAr camp illustrating that everyone’s the same, despite the surface differences.