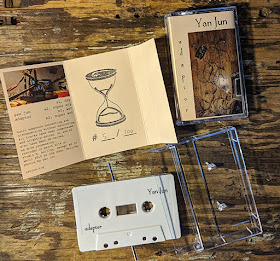 Adaptors. We all need them. For recording, for playback, whatever. And we all know that when you connect or disconnect an adaptor, you get that nice electric crackle or feedback as the connection momentarily becomes tenuous. Do you know anything about science? Can you explain this to me?

Regardless, the sound can be fascinating.

Yan Jun agrees with that. So fascinated was Yan Jun by the sounds of these adaptors that he crafted an entire tape around the phenomenon. Side A features “audio adaptors connecting and disconnecting without monitoring.” So you mean they’re doing it themselves? Sounds kind of spooky. Side B gets a bit more hummy, and it’s been “denoised.” But I think you’re here for the noise. How can you not be? This is “Adaptor,” for crying out loud! It’s the WHOLE REASON you’re here!

For noiseheads and current junkies. 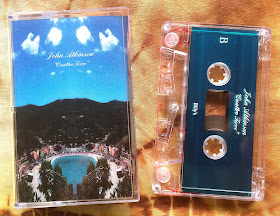 Smuggling in field recordings from idyllic towns along the Ligurian Coast, John Atkinson expertly waxes cinematic with a compelling, charming-go-spooky stretch of four ambient-drone tales, each centered around a charismatic soundmark from their unique locations.  The magic here is in the invitation, nay, command that you, the listener, stop dead in your tracks and wonder aloud, “Now, is the source of that scrape/chirp/crash/gust purely 'environmental' or is it actually ‘contrived' on some acoustic contraption or other?” Thus is JA’s nuance-dedicated craft, a mastery of culling and curating textured accents to break up and/or add depth to those rolling drone-swells and glowing, moody fogs he churns out for his sonic base. Both lyrical and absolutely transportive, “Quattro Terre” is one dramatic, distilled sound-tour that’s well worth having repeatedly, under differing volumes and times of day. 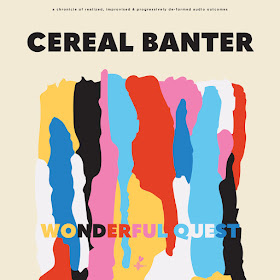 All those colors dripping into the sea of milk like lysergic streamers in the mist cannot portend the sheer buzzing dynamism of Cereal Banter. Then it’s my blood, the elements of the songs measured in angstroms as they electrify cells and antibodies and whatnot as I’m fully charged, fully enabled. Joseph and Nicholas are the psych-fuzz duo, filled with pop hooks, the source, generating the electricity like as they’re continually struck by lightning and zapped by atmospheric friction and whacked about by dangling downed wires. What then are we to do in the presence of such amplified power?

We are to do nothing. It’s our lot to be fried. 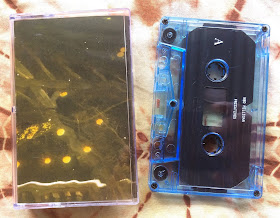 The undeniable magic of a covered porch shielding one from gale and deluge is hard to describe with words, but Ned Milligan does one hell of a job here pinning it down with his newest release, “Fricatives”, a document that balances crude, fourth-wall-broken field recordings of a falling sky with the organic, minimalist drone, decay, and natural distortions of an impressive* wind chime’s ululations bouncing off of at least one outside wall, concrete floor**, and sheltering ceiling.

Tape hiss gives way to gust, pitter-patter to sheets of rain, birdsong to concentrated dribble, all of this detail competing and bolstering the claims of percussive, weatherproof metal tubes a-shivering, concertedly, out L-O-U-D.  As a person who experiences very little rainfall and is not afforded the space to clang a behemoth wind chime from my own balcony***, Ned Milligan has captured and distilled a time/place/mood I can’t just pick up at the corner store, and I’m truly grateful.

Play this tape during a drought on a sunny afternoon with the volume cranked up and get absolutely transported to a rural porch in Maine while it’s raining cats & dogs!

*this thing’s gotta be like three feet tall, at least!
**assuming here, as there’s a glorious natural reverb to all of this
***without cramped neighborhood repercussions 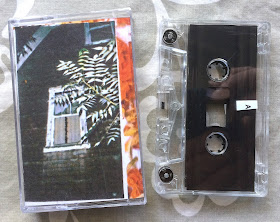 This most recent release on the Sara Laughs label finds Yes Selma paying homage to one of history’s most infamous electric guitar torturers with their side-spanning track “Jimi Hendrix’s Spine”, and it sounds a good bit like a SUNN O))) jam sesh, but with added fiddle-work grittily bowed into the mix of distortion, feedback, and distorted feedback. Not exactly helpful for trying to do the Sunday crosswords, but it might cheer one up if they were in the mood to break stuff, but only around objects unaffordable.

The second side, via Pony Moon, is filled with similar wall-o-noise energy, but without being led by the free-range noise-farming of amplifier-as-focal-point. Here, tape loops and a more packed choir of string-v-distortio-drones takes the edge off a bit, swapping out for a low-voltage fuzz-glow around the swells and drop-offs. Maximal theoretic destruction in a minimal visceral event.

Commanding solely but stellar a fleet of real fancy synthesizers, British Vancouver’s Mount Maxwell, ocean-gazing spirit-child of early Tangerine Dream*, rolls out some seriously deep Electro-Ambient/New Age synth-jaunts, cinematic strolls & sleepy sleepwalkings for us all to get lost along its foggy coastlines in for weekends at a time. These moody beasts have all the scope of a rolling epic, with the subtlety of a clinical assessment reference book, and it's truly a powerful and mesmerizing balance to take in.

This is a criminally under-the-radar release and I honestly cannot figure out why these tapes aren’t in their third pressings by now. Listen in deeply and float and float along! 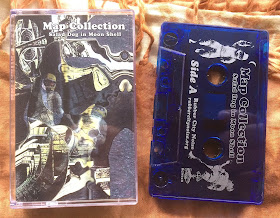 Forget dueling synths, Oakland supergroup*, Map Collection (Curt Brown and Fletcher Pratt), has concocted a four way meta-brawl here between electronic sub-genres with “Salad Dog In Moon Shell”, and it is no less than a vertical-listening strongarm, an impressionistic pitting of old school techno arpeggiations against industrial beats & textures, of modular synth tweakery against dirty drones, all of these disciplines simultaneously thrust into a rusty shark tank, and every single goddamn one of them allergic to any common pulse or cycle.

The achieved mood is a relentlessly chaotic series of claustrophobic dance floor meltdowns and lost-in-Joshua-Tree-and-my-flashlight-is-now-dead sprawlings of shadowy figures and shifting horizons. Probably not so hot for studying, but brilliant for losing your mind!

*check out their other stellar side-projects and collaborations, too! 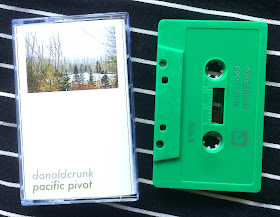 Donald Crunk’s “Pacific Pivot” is a full-on raging arpeggiator-party that’s so up in your grill, it circles back around into ambient territory. Perhaps it’s the unflagging consonance, or maybe the percussion-light environment? Maybe it’s just goddamn Eurorack magick?

No bones about it, if you’re in a bad mood, this Super-Synthesize-Me bliss-out is either going to cure, or straight up push you on over the edge, into Do Something territory.

Listen to at maximum volume to find out which way… 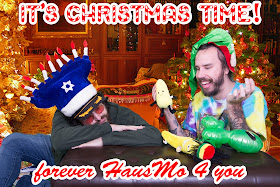 Hi! Real quick, because you guys are probably chugging nog in your pajamas and gathering around the fireplace or the television yule log on your favorite streaming service, but did you know that Pepper Mill Rondo has your holiday spirit COVERED for you today? That’s right, the Hausu Mountain boys Doug and Max have whirled together another sampledelic masterpiece, the successor to the bafflingly great E.D.M., this one a Christmas-themed ride called, appropriately, It’s Christmas Time!

Good, because this one was also recorded with a karaoke machine, and it’s a whipped slurry of samples coming at you so fast from both speakers that you won’t be sure if this is actually a Christmas tape or a sign of the apocalypse. So why not both? The spirit of the season certainly has a slightly different flavor this year, if you ask me.

It’s Christmas Time! fully comes across as if Doug and Max have thrown a ton of VHS tapes into the old wood chipper out back and painstakingly tried to splice the reels back together to get something usable. Did they succeed? The result is certainly usable, although it in no way resembles the original sources. Which is what makes this a perfect addition to your family’s holiday traditions, even though it essentially takes a nuclear warhead to them.

On second thought, don’t let your kids near Pepper Mill Rondo. They’ll have nightmares for weeks.

OK, back to your holiday traditions! Why are you checking your phone today anyway?

COIMS
“The Realization That Someone Has Stood Behind You Your Entire Life” C60
(Eh? Recordings) 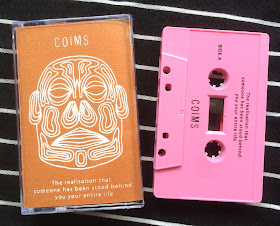 Improv duos don’t usually flirt this aggressively with psychy/doom-drone/noise aesthetics, nor do they organize themselves along the cusps of almost-but-nope-not-quite-predictable sound structures, tones, or sonorities throughout an album, but all these qualities come together cohesively and stunningly and STILL manage to resemble something aleatory and otherworldly, like something NASA has likely already piped down from their fancy satellites…oh, but here we are. COIMS is not fucking around.

Or rather, they Are fucking around So Hard that they’ve discovered (and mastered) a solid niche for themselves that is every bit as adventurous in its being hard to follow as it is its remaining easy to get lost in.  While, generally, no more than two events are going on at any given time on this transmission, both (actions) heavily bolster the others’ sonic potency ten-fold, filling out the space and saturating it with foreboding intent, as if they were but two frantically gesturing arms separated only by the throbbing, caving torso of your own mind, each of their fingers flicking & flickering on and off again a series-switcheroo of contact mic-captured acoustic crackles, cackles, and echos, heavily processed string-wrought textures, loose-riffage, drone, and/or myriad herz-levels of feedback. It’s all just a hair shy of a bit much, as far as minimalism historically concerns itself, and it's all fucking great.

A didgeridoo, space-monk, and/or cosmic death ray may make multiple appearances. At times, a mysterious spaghetti-western vibe threatens to take hold, were that “West" to be an amalgam of Joshua Tree and Roswell, but each joined, somehow, improbably fused and infused with the unconquerable terrain and tribal spirit of inner Australia. This release is powerful, and a great addition to the ever stalwart Eh? roster! 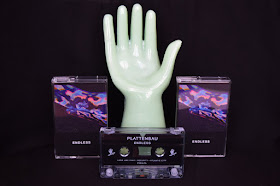 More rangey darkwave ethereality from San Francisco’s Glowing Dagger, this time via Plattenbau’s “Endless.” Gloomy synths and clicking drum machines prop up vocals straight out of the school of Beth Gibbons. The well-mixed result makes for appropriate synthwave soundtrack fodder – there’s definitely an eighties suspense thriller/supernatural romance that’s missing four perfect songs. And by the time you realize there are only four songs (d’oh!), you’ll already be neck deep in some sort of séance that you’ll need to escape at the last second. Or maybe your lot is to succumb to it. Who’s to say?

You need more songs to get through whatever it is! I guess that’s what the rewind button is for? Then “Endless” can be truly … endless.