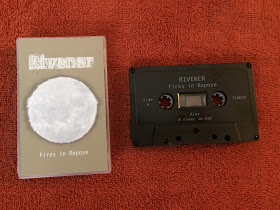 Rivener – one who rives. That means rends, or tears apart, for those of you who don’t speak thirteenth-century English. And no, I didn’t say “scrivener,” so all you Melville fans out there just calm yourselves down. Paul Belbusti and Michael Kiefer rive the meat from the proverbial improvisational no-wave bone in this here duotic outfit, and listening to it is like being hacked with a meat cleaver. Over and over and over. In a good way though!

Over three tracks and 33-ish minutes the duo tears into conventional rock instruments – guitar, drums – and the prescribed methods to use them with unhinged abandon, sometimes even bordering on the hinged, which makes this noisy improv release an easier swallow than your average one by toolbox-wielding psychopaths hellbent on torturing their gear. “Almz” shreds like early Sonic Youth improvising, then devolves into late-period Sonic Youth improvising. And it’s called “Almz,” like Rivener is handing out currency that will better your situation, but scuzzily! (That’s why there’s a “z” in there.)

These guys title their compositions perfectly. “An uneventful first quarter” pretty much means your first quarter was a failure in real life. But in Rivener Land, it means utter success, kicking out massive jams, interspersed with periods of tranquility, then kicking out more massive jams, then more tranquility, then JAMZ (because “Almz”), and rubbing your nose in those manky spreadsheets like a misbehaving dog. How dare you come to me with a negative on your P&L! Actually I don’t care. This Rivener tape rules though.