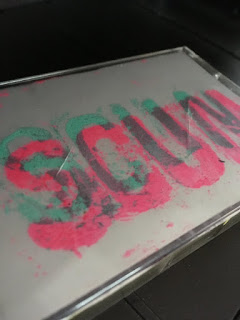 SCUM is total enthusiasm. They make music because it’s fun, because they can. Music from basements, music from bedrooms, music from garages, wherever the mic is set up (and it’s probably just one mic in the middle of the room, or maybe they’re just recording to a decent boombox, I don’t know). Total lo-fi, barely competent punk, clever beyond its means. SCUM = scuz. SCUM = fun! I betcha SCUM has a lot of fun band/music friends who they hang out with and play shows with on the weekends – after their homework is done of course. There’s a song called “Did You Do Your Homework?,” which likely belies the band’s age. There are also songs with funny names such as “Cigarette Song for Kids” and “Nobody Likes Me Everybody Hates Me I’m Gonna Eat Some Worms,” which, as all you cool kids know, is a Kids in the Hall reference. Anybody who references KITH is OK in my book.