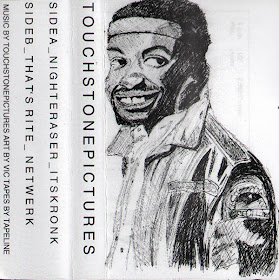 Hip hop inspired 8 bit late night dance sequences. 808 drumbeats galore that bleep, get wet and get stuck in your head. "Nighteraser", the cassette's opener, could easily be the walkup introduction music for a heavyweight boxer in a Super Nintendo universe. The melodies in these songs are strong and nicely escalate in complexity. Elements of noise are incorporated but are balanced with the melodies.

"It's Kronk" is a little more atonal and reverberated. A minimalistic hi-hat is the only constant as the more cerebral, mysterious effect laden melodies hypnotically repeat through higher and lower frequencies. Later on in the song it changes mood and isn't menacing any longer, but it is still challenging music.

Side B opener, "That's Rite", is a little more funky. Fat bass lines are accompanied by wah-wah synthesizer. It sounds like eating greasy french fries. Some nice computer chords are played and the song at times feels straight up weirdo.

"Netwerk" finally gets the human touch and opens with some non-standard tuning guitar duo that is quite pleasant to the ears. It is followed by a droned out organ and finally an upbeat, uplifting looping synasizer part with fuzzed out low notes. A great end to a diverse electronic release.

One thing I appreciate about this tape is that while the sounds are all pretty much made by computers, which for my tastes is a turnoff, I do get a sense the musician is using his instrument to its full capacity. There is a lot going on in this tape sonically. The genres and moods switch and yet it is all being clearly played by Touchstone Pictures.

I am also about 90% sure it was made using Buzzmachines, some great free Windows shareware from 2002 that allows you to conduct and produce some fantastic beats. Maybe I'm totally wrong, but even if I am Buzzmachines is worth experimenting with. What do you have to lose, it's free!