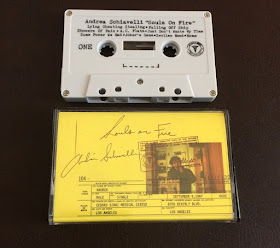 I dare you not to fall in love with everything after listening to Andrea Schiavelli’s Souls on Fire on OSR Tapes. The erstwhile member Eyes of Love, Nude Beach, and Punks on Mars knows a thing or two about toiling through the songwriting process, and he presents his opus here, a collection of seventeen songs spanning false starts with other bands and projects and albums. Do you think this is some sort of cobbled-together catch-all nonsense of tracks orphaned by their creator for one reason or another? You’d be dead wrong! Or, well, you’d be 100% right about the orphaned tracks thing, but this is certainly not nonsense in any way. Actually, the disparate nature of the track styles is a huge part of the charm. They showcase Schiavelli’s skill working in all kinds of idioms; from folk to indie to post punk to British Invasion to ballads, he offers a master class in making fricking swell-ass tunes, each a true extension of himself as a composer and as a human being. I’m talking about feeling, dude, in that Andrea Schiavelli injects more of it into a three-minute pop song than you can into an angry Facebook post decrying the inconsistency of the timing of your mail delivery. That’s right, Aunt Edna, he blows you right out of the water!

Souls on Fire plays like the soundtrack to a Wes Anderson movie that hasn’t yet been filmed, one from the turn of the century or so, when Mark Mothersbaugh’s curatorial magic still permeated and underscored the most important scenes. Those were the scenes that hit me, the ones where I felt there was some sort of universal understanding of sadness and joy mixed together in bittersweet harmony, executed with a knowing and educated coolness that passed between Anderson and the viewer like a nod of mutuality and respect behind mirrored sunglasses. I pictured myself nodding at him like that, like we were best buds, more often than I’d care to admit. Maybe that nod is now passing between me and Andrea Schiavelli, because we both get it and we want to get you in on that action. Or maybe it’s because I have that first Punks on Mars record, and the savvy consumer in me has also purchased aviator shades, and I’m just begging for attention because Souls on Fire is more listenable in the long run than Punks on Mars. Don’t be fooled, though – this is all good stuff, and you’re in good company. I’m probably going to listen to this tape another several times today to make the afternoon go quickly, and if I can’t shake those foggy good feelings, then you’re all just going to have to live with me that way, sunglasses affixed to my smiling face well into the evening hours.