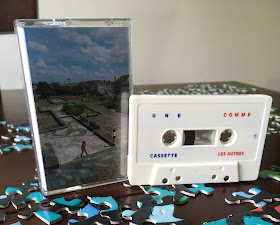 Joachim Henn isn’t one to relax. The Stuttgart native has released many things with many folks under many guises, some of which I’ve heard of (e jugend! trikorder 23!) and some I haven’t, but whose ignorance I will rectify posthaste (Frood of the Loop, Olumpique Jazz Trio). Here he drops “Une Cassette Comme Les Autres” as Perrache, and wouldn’t you know it, it’s a knockout of a tape release.

You can’t shake its trance, that’s for sure, as waves upon waves of nocturnal energy billow and pulse, densely coalescing and interacting like the friction of cloud formations. Henn builds massive sound structures that don’t come off as imposing as they are, as if their enormity was relegated to sheer distance. In fact, they’re not imposing at all – they’re inviting, hovering like lullabies and gently enveloping you as their characteristics emerge. Even when the tones are harsher, they’re still capable of engendering an awestruck response.

Beginning and ending with the fascinating “Chien de Loop,” the tape eats its own tail, ouroboros-style, although neither “Chien” resembles the other really; instead, they’re complementary pieces. But it illustrates how one of Henn’s ideas can be distributed in completely different ways. And it showcases how tightly controlled those ideas are, as if the elements of them find their way into each other and vice versa, each track resonating with and expanding upon the others. There’s not a dull moment on “Une Cassette Comme Les Autres,” so track one down as soon as you possibly can (not sure how easy that’s going to be for you Americans – I guess you can do a little distro digging).