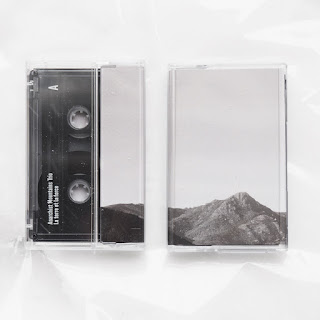 When you think “anarchist mountains,” you’re thinking huge, am I right? Massive geographical formation, towering in the sky, and not beholden to anyone’s rules. Punk weight, right there on the face of the planet, in everyone’s line of sight. Well, Anarchist Mountains Trio, a trio (duh) consisting of brothers Jordan and Stefan Christoff and joined here by Joseph Sannicandro, are even more anarchist than you think: instead of vying for your attention with a sound as big as their name, something of the ear-splitting variety, they 180 that thought into the quiet spectrum, turning inward, not beholden to anyone’s rules, even their own. Or something like that.
And thus La terre et la force, or “Land and strength,” understands the limitations of how humans relate to things that are bigger, older, and relatively incomprehensible. Again, instead of tectonic sounds to shock the system, the trio approximates the movement and the scope and the energy of the growth of something like the mountain range of their moniker over millions of years and distills that vision, one clearly observed from beyond a terrestrial position, into a graceful reverie. Don’t get me wrong, this thing is filled with awe – how can it not be – and the synths, guitars, and field recordings intertwine as if they were stardust reconstituting on the surface of the planet. You’re breathing these sounds and reveling in silence, never once considering that the air particles in your lungs are the size of continents. There really is some relativistic chicanery going on here!
But this is perfect for Amek Collective, beloved Bulgarian label. La terre et la force redefines the rules even as they’re being redefined, keeping everyone on their toes at all times and causing incomprehensible discombobulation – all while being as chill as chill can be. This one requires a deep dive – take it, I beg you.
https://amekcollective.bandcamp.com/
--Ryan
Ryan at March 26, 2021
Share
‹
›
Home
View web version