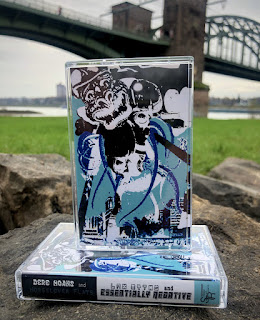 What better way to get back into the game than with two of my favorite electronic weirdos, Tony Lien, aka Dere Moans and purveyor of Bad Cake Records, and Tim Thornton, aka Horselover Flats (and Tiger Village, among others) and purveyor of Suite 309? I’ll tell you what better: a split album by these two nuts on the aggressively intellectual Cologne-based cassette label Strategic Tape Reserve! It should come as no surprise that the combination of these three things – artists x 2 and label – have resulted in a wildly inventive maelstrom of cacophony. At times harshly obliterative, at others fantastically mesmerizing, Lax Myths (the Dere Moans side) and Essentially Negative (the Horselover Flats side) dream of definite futures where androids definitely dream of electric shrimp.
Did I type shrimp? Weird.
Anyhoo, Dere Moans hits hard and quickly, with Tony repurposing some material he’s had laying around throughout Covid and mashing it into a chunky paste of noisy sample jams. Don’t call it plunderphonic: or, wait, it’s pretty plunderphonic, but then again, Dere Moans is the best at that, so let’s cut him some slack. Lax Myths is bracing, that’s for sure, and the pace and volume doesn’t let up regardless of what slides through the old sound-mulcher. It’s an action-packed blast of face-melting vibes – the Total Recall of this package.
Tim as Horselover Flats loves him some Philip K. Dick, and as such, we’re kindred spirits (I’m obsessed). Grabbing his moniker from VALIS, Tim last played a show, again before Covid, not as Tiger Village or CDX but as this Dick-inspired incarnation of himself. Armed with sine waves, kick drums, and voice, Tim crafts a paean to the literary master, a future-noise collage whose tracks are all titled after Dick-isms. Appropriately schizophrenic and disruptive in nature, Essentially Negative is his A Scanner Darkly, mind rending but not aware. A glorious, nightmarish trick.
But in the end, you get these two on a tape, you can’t go wrong. Strategic Tape Reserve does not go wrong either. Frankly, they never do.
https://deremoans.bandcamp.com/
https://suite309.bandcamp.com/
https://strategictapereserve.bandcamp.com/
--Ryan
Ryan at May 17, 2021
Share
‹
›
Home
View web version