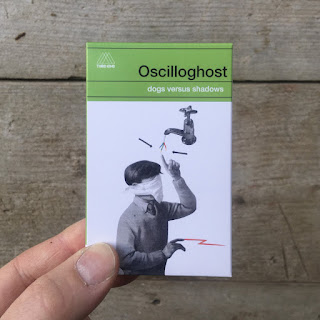 You’re warned from the start: Oscilloghost isn’t for the weak-willed, it’s for the truly hearty, those whose constitutions can withstand a fright or two. And Dogs Versus Shadows, aka Lee Pylon, lays it on thick, the suspense I mean, letting the spirits occupy his synthesizer rigs and just get all gooey in there with the ectoplasm and the wisps of whatever ether they’re made out of. Maybe they’re just figments of ESP, but they sure sound real. They sure sound like they’re hovering just on the other side of the physical plane, waiting for the right moment to bend reality to their will and manifest.
Lee Pylon allows them to manifest.
Yeah, he’s like a medium or something, channeling otherworldly entities, sometimes like an actual witch or whatever, sometimes like Steven Spielberg when he mixes childhood wonder and horror in equal measure. At any rate, the tones and tales are real, the experiments in sonic parapsychology teasing out the creepily visceral and wondrously ethereal simultaneously. It’s easy to get lost in the inky blackness of a winter woodland, wandering restlessly as you search for meaning. Dogs Versus Shadows provides the soundtrack for that, and maybe it turns out that – spoiler alert, Jack! – you’re the one who’s the Oscilloghost after all. Wouldn’t that be a scrumptious twist!
https://dogsversusshadows.bandcamp.com/
https://thirdkindrecords.bandcamp.com/
--Ryan
Ryan at May 12, 2021
Share
‹
›
Home
View web version