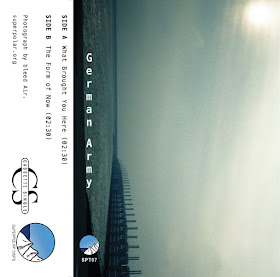 Continuing in the Superpolar TaÏps cassingle series following that Qualchan. one, which also features the likes of Adderall Canyonly, Nicholas Langley, and moduS pony, among others (still a veritable Who’s Who of the international experimental tape scene), we come to one of the most prolific artists you can imagine, the San Gabriel, California, duo German Army. Long known for their “critique [of] US imperialism and nationalism,” GeAr has built their brand on punishing sonics, often bordering on electronic or industrial, featuring tribal rhythms and spoken samples, and smashing at the façade of the status quo until it shatters, splintering into abstract fractals that are arguably more beautiful and interesting (and fair) than what came before. On side A of their C5, GeAr blitzes through “What Brought You Here,” a taut drum-and-bass number flecked with ethereal echoes and faded tones. It’s right out of the German Army playbook, and it satisfies every craving you’d think it might. The B-side is called “The Form of Now,” but if you want to hear it, you have to get a tape … no streaming! Which is fine, the tape’s more fun anyway.
https://germanarmymusic.bandcamp.com/
https://superpolar.bandcamp.com/
--Ryan
Ryan at June 18, 2021
Share
‹
›
Home
View web version