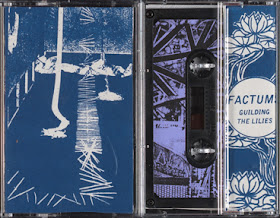 Finally!Seattle's Factums bless us with another dose of tortured dub worship and blank, no wave deconstruction, this time in the form of a cassette.If you are still being mesmerized by last year's ultra-inventive "Flowers" LP, as I know I sure am, you will surely fancy this batch of songs just as much, if not more.
Right off the bat, Lilies fills the open spaces with damaged percussive loops, reminiscent of early Suicide and Young Marble Giants' clever minimalist bumps.Every click and rattle are soaked in heavy delays and more than a touch of reverb.Once they have totally hypnotized you with a lengthy clicking drone, they chime in with a creeping synthesizer and those downer vocal slurs that we love them for.These elements all seem to melt together so well for this band, and they continue to belt out something completely different and fresh every time.
The songs on Guilding aren't so similar to what we've been hearing from them recently.There's still a strong presence of Residents-esque no wave weirdness to their music, but things have definitely been toned down in terms of tempo and overall mood.These tunes are fairly laid back and heavy on the dub tip.They tend to drift off into space here and there, but this tape is pretty cohesive in hindsight.Works in fragments just fine, which is how most of their stuff is put together, but I think this album is best listened to in it's entirety.This is a bit of new territory for Factums, if you can imagine that.Fantastic.
MJO at December 24, 2010
Share
‹
›
Home
View web version