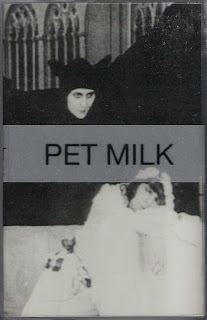 It may be 2011 today, but Philly band Pet Milk is still living in 1994. This tape hearkens back to a time when a lot more people were putting out tapes. There are big crunchy guitars, a peppy but still midtempo rhythm section, male/female vocals and the tape was written by a dude named Herbie (save for a MBV cover, who coulda predicted that?)
It's pretty good stuff, not totally my area but I'm sure anyone wishing to relive his/her early 90s college days (or someone wishing he/she had college days in the 90s in the first place) would enjoy this. The final track "Always Knew It Couldn't Stay" is by far the best thing on the cassette; it's an uptempo, minor chord jangler with the best hooks Pet Milk have on display. It's the catchiest cut here and I'm a big, big fan of catchiness.
Very nice looking, pro-dubbed tape as usual from Sal Giorgio's Peasant Magik label, this time breaking out of the psych/drone mold. I dig that cover image a lot too, a hearty handshake goes to whoever can fill me in on which film it's taken from.
Pet Milk
Peasant Magik
Auxiliary Out at January 01, 2011
Share
‹
›
Home
View web version