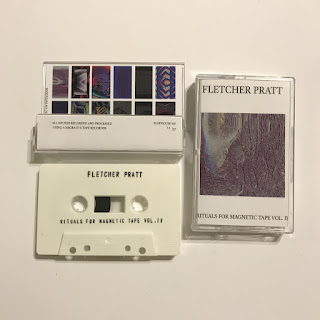 When I think of “ritual,” I think of something that happens beyond the everyday, something that’s set aside and sacralized for a specific purpose, whether that something is spiritual or religious or not. Could just be a ceremonial type thing, something you set out to perform while focusing intently on the steps, revering each moment. Could be conjuring demons in the woods. The possibilities are literally endless.
When Fletcher Pratt tackles a ritual practice, he does it with a Nagra IV-S tape recorder, on which “all sounds [were] recorded and processed.” Talk about focus! His medium is magnetic tape, and he hunkers down with it, cradling it like a precious heirloom, ready to turn what’s on it into a paean to the ever-loving cosmos that it came from. Maybe that’s what he thinks when he’s working, “ritualizing,” or maybe not, but in the end the result is the same: the sounds come via a carefully crafted process that’s hopefully repeatable. Given that this is volume II, that seems to be the case.
The tape squirts and spits as it reels around the Nagra, also shimmering and crackling and twinkling and chirping. It’s the sonic equivalent of the natural world, all in motion all the time, a complex system of physics and matter. And even if Fletcher Pratt doesn’t decide to don a cloak and perform secretly in the middle of a forest, it wouldn’t be the most outlandish thing to picture if he did. In fact, Rituals for Magnetic Tape Vol. II is its own shrine to its own self, with fragrant organic incense the only thing getting sacrificed to it. Mellow out and descend!
https://fletcherpratt.bandcamp.com/
https://flop-house.bandcamp.com/
--Ryan
Ryan at January 18, 2021
Share
‹
›
Home
View web version