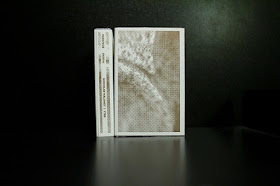 What can JrF contact microphones, tape decks, a no-input mixing board, electronics, and field recordings get you? For Nicholas Maloney, it gets him some of the deepest, dankest low-end sound design imaginable. For its first half, FTES barely registers any treble – it scrapes the sonic depths at such frequencies that molecules are actually disturbed. Literal molecules! The resulting glitches in the space-time continuum are distinct enough to be perceptible, but they happen so quickly and so frequently that we can’t get a grasp on them. It’s like stills wound forward four frames, back two, forward another four or five, back three, moving the timeline, but oddly. The unnatural shifts in reality are like hiccups, but ones we can’t cure by drinking tall glasses of milk upside down-ish.
The end is not so interminably (but not bad interminably) low on side B, as the tones register in higher frequencies. They’re still intense, still disruptive, still massive – don’t ever get me wrong about that. By the end of the fourth track (all four untitled) it feels like you’re sitting in the middle of fission reactor at rest, radiation still vibing through your body but the works kind of shut down. Maybe FTES is meant to recreate the sound of the ghosts of nuclear reactions – I wouldn’t be surprised at all if that was its intent. Or shall I say, FTEnt? No, that’s dumb.
https://blanketswimming.bandcamp.com/
https://park70.bandcamp.com/
--Ryan
Ryan at January 15, 2021
Share
‹
›
Home
View web version