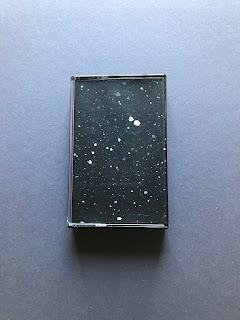 They’re both at it this time. Our favorite Stuttgart ambient synth artists Joachim Henn and Günter Schlienz have teamed up as Snowflake Orchestra, the single greatest frozen-precipitation confab in the history of music. The front cover of the j-card says it all – and it doesn’t even say anything. It’s just white snowflakes against a black night sky, illuminated by a light source out of view; a streetlight perhaps? It’s a solid stab at selecting Stuttgart streetlights as the source streaming silvery illumination into stifling starless sky. But maybe that’s just me, and we’re supposed to focus on the stillness – each white speck is both a recipient of sonic accompaniment and a participant in the chilly nocturnal dance. You can let your mind drift on the updrafts along with our delicate frigid muses.
And that’s what Henn and Schlienz do here – they immerse themselves in the falling snow and become one with it. The Snowflake Orchestra pieces are light and delicate, yet carry a sense of mystery and wonder that begs close attention. Know how every single snowflake is a unique design? The Orchestra here leans into that, treating the natural variations with reverence while watching them blow around through the street. The sounds are what silence sounds like if it had sounds, like breathing and waiting and watching in song. That’s a neat little trick the Snowflake Orchestra is able to pull off – but if I trusted anybody doing that, it’d be Joachim Henn and Günter Schlienz.
http://cosmicwinnetou.blogspot.com/2020/12/cw51.html
--Ryan
Ryan at May 28, 2021
Share
‹
›
Home
View web version