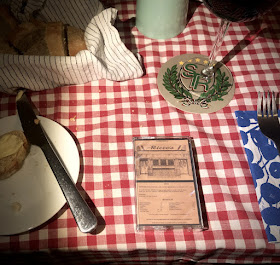 VLK’s 2018 jawn Avril and Sean in Camden was my introduction to the New Jersey DJ (or at least VLK was once based in New Jersey), the tape chronicling a young VLK’s commute to and from work with a boss who listened to a lot of Sean Hannity and dumb stuff like Avril Levigne. (I think I’m remembering that correctly.) It is a weird concept, but it absolutely worked. Nur Darme Stu Turmiento is also a weird concept that totally works, and it also happens to chronicle another of VLK’s employment adventures. This time, instead of being stuck in a car, VLK is instead stuck in an Italian restaurant, forced to listen to late-1990s radio and being accosted by “Rat Pack–adjacent” personalities and “the odd operetta aria outsider.” I can only imagine one’s boss at such a 1990s restaurant as a paisano wannabe goodfella. I can already hear him speaking in an amazing accent in my head.
Nur Darme Stu Turmiento is a mixtape that aims to recreate the feeling of working in such a restaurant. In fact, the entire j-card is a recreation of a menu from that type of eatery, and it looks remarkably authentic. The music is not what you would expect to pipe in from the PA – that would be more along the line of Old Country crooners and opera singers wafting in the background. But VLK takes this concept and mashes it right together with electronic proclivities, weaving together an astounding mix that’s singularly current in its stylistic presentation yet retains a distinct Hoboken-Italian-restaurant flavor. The new and the old flow seamlessly together, a winsome meditation on a singular environment by someone who’s experienced both the front and the back of the house. Plus, it’s just a banger of a tape – no need to sugarcoat there.
https://strategictapereserve.bandcamp.com/
--Ryan
Ryan at May 26, 2021
Share
‹
›
Home
View web version